CritiqueLab. A Toolkit for Critique in Digital Cultures

A cooperation between the Centre for Digital Cultures (CDC ), and
The research training group “Cultures of Critique”, funded by the – German Research Foundation (DFG) – Spokesperson Beate Söntgen.

Sum up
We are told that critique in digital cultures is out, dead, done. Interestingly enough, this is happening right in the moment, when we need critique so urgently. This is firstly because digital cultures are opaque and not fully understandable any more, due to their technological conditions. Secondly they tend to create a unique, ubiquitous and almost natural permanent be-in in technical environments, so that there is no chance for critical distance any more.

There are 2 task for a “Toolkit of Critique” in this situation. Firstly it is about discussing the state of the art of critique in digital cultures. And secondly we are looking for efficient methods of critique, adapting their conditions.

The Workshop
Critique as a reflection of “bad” social, political, economic or technological conditions and as a generator of interventions in them, became difficult to conceptualize and to execute in digital cultures. As these cultures are ubiquitous, opaque and immersive, based on non-understanding, secrecy, and unconscious hyper-affective involvement, as well as on a disillusionment of anthropocentrism, they undermine the prerequisites adopted for critique till now. If distanciation, the ability of recognition, or subjectivity are dissolved, or at least intrigued, new formats and methods of critique must be developed. At the same time, critique is urgently needed as digital cultures are implemented in situations and narrations of crisis and catastrophes, as climate change, turbo-capitalism, terror, or migration, which face us allegedly at the worst with the possible end of human existence. So we are confronted with the necessity to reflect, to value, and to change a negative situation just in the moment, when critique is weakened and thrown into a never-ending chain of self-reflection of critique. In this paradoxical situation profound analysis of the digital is needed as a basis for practices of critique and intervention in it, as well as for concepts of a digital ethic. 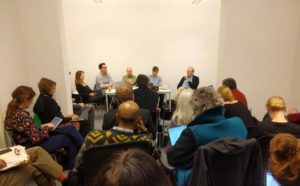 The opening discussion focuses on “Digital Critique or Critique of the Digital?”. The first approach consists of looking for formats of a specific digital critique, which comes out of the technological and epistemological conditions of digital cultures themselves. Second approach is focusing on critique of digital cultures, also questioning, whether and how we can use older theories of critique, like Adorno’s critical theory, or Foucault’s critical genealogy.
With: David Berry and Frédéric Martel Moderation: Roberto Nigro & Martina Leeker

Four different topics/panels should compass exemplarily the technological, epistemological, social, political, and economic conditions of digital cultures, framing formats and methods of critique in them.

The panel “Conditions of Critique in Digital Cultures, and the Potential of Aesthetic” discusses critique and methods of critique in digital cultures between critiquing them and digital critique. The potential of aesthetic methods is focused.
With: Frédéric Martel– David Berry – Nikolaus Müller-Schöll – Ulf Wuggenig. Moderation: Boaz Levin, Beate Söntgen

Social media and algorithms create the new public spheres and politics, by – amongst others – fake news, filter bubbles, or new right movements. The panel “Digital Public Spheres and Digital Politics as Critique?” asks for the conditions as well as for methods of critique in these spheres, focusing older practices like solidarity, political disput, or democratic behavior.
With: Carolin Wiedemann – Stefan Römer – Roberto Nigro. Moderation: Andreas Bernard, Alia Rayyan

The panel “Critical Socio-Political-Organization in Digital Cultures” asks for the state of the art of organizing civic society in digital cultures. This concerns the technological conditions and politics of digital labour as well of the organization of institutions.
With: Alex Demirovic – Ned Rossiter – Timon Beyes. Moderation: Armin Beverungen, Lisa Conrad

Digital Cultures make us be-in in smart infrastructures and affective technical environments. Does it helps to go with a new understanding of technology and the human as a symmetrical agency? These are questions for the panel “Ethics and Critique of Infrastructures, Affects and Crisis” Feed these cultures the involvement of human agents as simple giver of data in a global data-driven economy, or could they figure as a guarantee for an ecological ethic of human humility and relational existence?
With: Gabriele Gramelsberger – Marie-Luise Angerer – Jutta Weber. Moderation: Clemens Apprich, Lotte Warnsholdt

Input Martina Leeker for the Opening: The state of the Art of critique in digital cultures
If we come to Critique in digital cultures we get a disastrous picture, according to what we think, critique should be or had been. It had been the cultural institution and the human capacity for differentiating within and reflecting on so-called reality, for finding distances to the being-in-the-world by claiming an individual view-point and position, and finally for intervening in “problematic” social, political, economic, or technological situations. In digital cultures, on the contrary, we observe completely different conditions, tasks and effects of critique. I will mention some:

To sum up: As digital cultures are ubiquitous, opaque and immersive, based on non-understanding, secrecy, and unconscious hyper-affective involvement, as well as on a disillusionment of anthropocentric premises, they undermine the prerequisite adopted for critique till now. We are always already in, loosing distance as the decisive condition of critique.

May be that we can be happy with these descriptions. But: there are 2 points to be taken into account. Firstly it is to be said that the correct critique never existed, but only historically changeable forms of it. If it seems for example natural to us that critique needs distanciation, this is a discursive implementation of critique and not its status quo. On the contrary: Critiquing is always affirmative, because we are always involved in it. This leads secondly to the assumption that critique stands for different forms of governmentality, creating ever-changing modes of differentiation, decision making, and subject building, regulating inclusion and exclusion, and installing and controlling resistance against regimes. So we have to take into account that critique is a form of domination. This leads to Foucault’s idea of suspending critique in order to understand the conditions of its judgments. Following this we have to analyze and beat the governmental effects and not critique itself. What kind of regime is established by critique in digital cultures, considering a paranoiac, affective, and resilient subject, practicing critique as a mode to connect people to smart technical environments?

It is this perspective that should help to come to a profound analysis of critique in digital cultures in order to find practices of critique and intervention, which at least are able to reflect on its governmental aspects. The aim is to value, and to change negative aspects of digital critique by finding new forms of critique, or by re-activating and updating older ones. The question is, what comes after: distanciation, recognition, or subjectivity? What could be forms of digital critique, like: playful paranoia, critique coming from the point of being in, using hyper-activity for critique, or changing the fact of being forced to undertake permanent differentiation into distanciation and the power of resistance.

The aim and task of the workshop is to think about and discuss new formats and methods of critique, imagining a kind of very concrete and pragmatic toolkit for critique, in order to overcome a kind of pessimism or helplessness in this new situation of “being-in” and always hyper-connected. If critique in digital cultures has the task to connect people to their technical infrastructures by participation: which kind of critique is needed to subvert this?

A special interest is in art and performance, because they could have a specific role in this. Martin Saar and Judith Butler pointed out that within the art of critique of Michel Foucault as genealogical method of de-constructing knowledge, subjectivity, and regimes, the use of exaggeration and alienation is crucial. To become an alien enables a self-enlightenment of society. Art and performance also bring a negotiation of proximity and distance, involving affects, and emotions and cognitive capacities, which could be a basis and training for subjectivation and individual resistance. This is important as digital cultures take humans agents as statistics, or – as Andreas Bernard points out it in his recent book “Komplizen des Erkennungsdienstes“ – as objects of police recognitions services, what is chosen astonishingly enough voluntarily by ourselves.

Type and press Enter to search